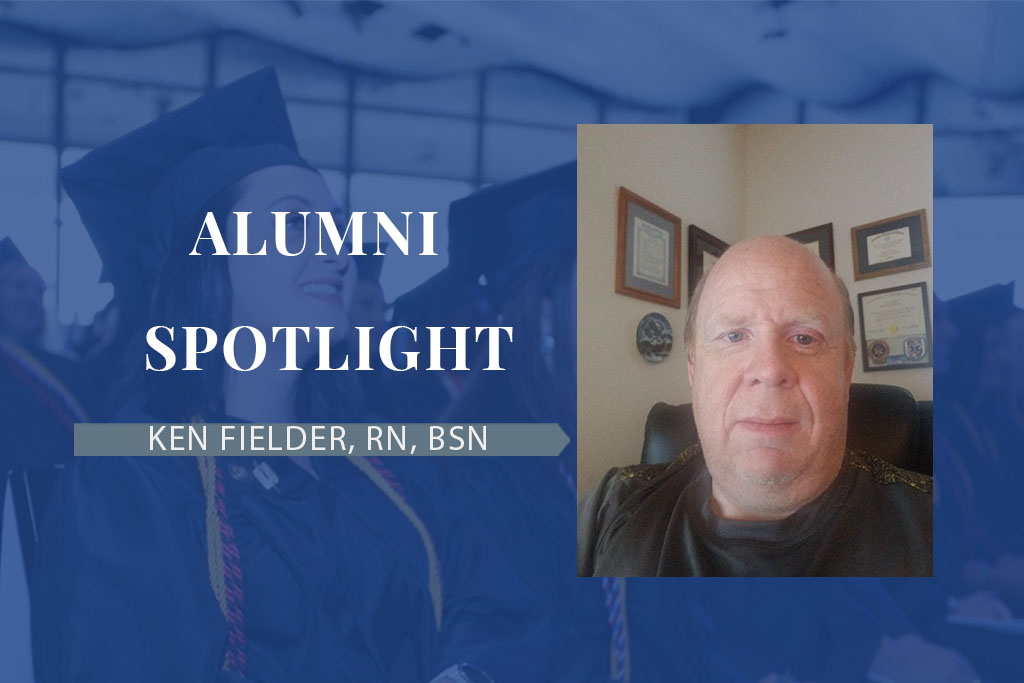 Ken Fielder, 50, was born into a family of nurses. His mom was a pediatric nurse, and his younger sister is an ICU Nurse. “Sometimes, we would talk shop and compare how the nursing industry has grown and changed since my mom’s time.” In 2019, Ken completed the RN to BSN program at Aspen University.

Ken has been an RN since 1991 after earning his ADN from Arapahoe Community College in Littleton, CO. He began working at the Medical Center of Aurora in Colorado, first working as an ICU nurse, and then moving on to the ER. He enjoyed providing compassionate care and making a personal connection with his patients and their families. “It was tough, but very fulfilling. I would cry with them when they suffered a loss, but I would also share in their joy and celebrate good news.”

In 1997, Ken and his wife decided to move to Maryland, where they lived for the next six years. “We moved to be closer to my family.” Ken continued his work in the healthcare industry as a critical care transport nurse and paramedic. As a flight nurse and member of the medevac transport team, Ken was responsible for providing care to individuals who were afraid or even panicked. “We responded to a lot of catastrophic car accidents, major accident scenes, or patients having acute heart attacks that needed to go to a major facility out of state. It was extremely intense.”

Ken wanted to climb up the career ladder and move towards management, “I wanted to be an advocate for the staff but also mentor them to grow in their careers.” He knew the hospital would not hire him without a BSN, so in 2017, after researching online programs, he decided to earn his BSN at Aspen University. Ken found the Monthly Payment Plan extremely affordable. “Aspen also accepted all my previous education credits.”

While earning his degree online, Ken returned to Colorado and advanced up the nursing career ladder to become a house RN supervisor, providing oversight for multiple departments. This role allowed him to learn aspects of management by addressing patient care, staffing, and any other issues that would arise. After earning his BSN, he was promoted to float pool manager. “They hired me as the float pool manager in July 2019. Once I graduated in November [2019], I applied for and got the full-time manager position.”

Ken is thriving in his current management role. “I like supporting the staff so that they can provide compassionate patient care. I want to make our patients feel like they are not just numbers. I want them to know that they and their health matter to us. That’s important to me.”

He sees himself in this position for the next few years, nurturing his leadership skills, and eventually moving on to a director position, hopefully in an inpatient setting. “I’m hoping to gain more management experience here and then transfer somewhere else as a director. I want to live somewhere near the ocean.”

Ken credits Aspen with preparing him to be an efficient manager. “This wasn’t an easy program. It was very challenging. I have been a nurse for 26 years, and I learned so much at Aspen.”